Kobane: appello per corridoio umanitario / open up a corridor between Kobane and Turkey 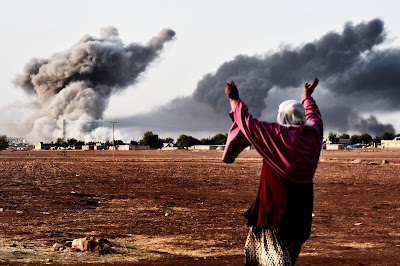 Appeal for a “Humanitarian Corridor” / open up a corridor to Kobane
Kobane desperately needs our help to rebuild itself and for this to take place, the establishment of a humanitarian corridor between Kobane and Turkey is an urgent requirement.
As of today, July 2015, the city of Kobane, located on the Syrian-Turkish border, remains subject to the merciless attacks of ISIS. Equipped with far less sophisticated weapons and with limited resources, the people of Kobane’s unflinching determination to survive is their only real means of opposing ISIS, to hold on to their independence and to be free from this brutal violence. And this is what they have undertaken, at times supported by the US air force as part of the international coalition to resist the advance of ISIS. The price of Kobane’s resistance has been high: countless dead and injured, and an almost completely destroyed city infrastructure, which has left essential supplies of water, electricity, food and medicine in a state of collapse. And the threat from ISIS has still not been eliminated.
During the fight for Kobane, ISIS laid millions of mines to obstruct the population from returning home and to make the cultivation of agriculture on which they depend for their livelihoods impossible. Kobane is almost completely closed off from the outside world and every day it has to deal with new attacks. The only way that people can obtain essential supplies needed for their survival and protection is to go north across the Turkish border. This corridor is for the most part kept closed by the Turkish government. Turkey has provided asylum to many people from Kobane and hospital care. Nonetheless, given the scale of ISIS's war and the catastrophic situation in the city, this is by no means sufficient, especially since many of those who had fled have since returned to their destroyed city in order to rebuild it. Whilst international humanitarian aid to other regions of Syria is being provided through the Turkish border, it must also be possible for the population in Kobane to receive supplies. Only if the border with Turkey is open will the people of Kobane be able to receive all the aid and assistance which has been offered to supply, protect and rebuild their community. Reconstruction of the destroyed infrastructure will only be possible if international emergency helpers and experts are able to gain access on the ground to the cities that are in urgent need.